From a Friendly Blog: "Was the Average Soldier 'The Scum of the Earth' in the Eighteenth Century?"

on December 22, 2018
Alex Burns, on his “Kabinettskriege” Blog has put out another informative myth-busting article exploring the demographics of the average soldier in the 18th century. The question Burns asks this time is, “was the average soldier the scum of the earth in the 18th century?” His question is derived from exploring a quote made by the Duke of Wellington a few decades later. Though, such suppositions are not isolated to Wellington’s thoughts alone, as they are often born out of modern mythology that erroneously portrays an 18th century British Army that was a haven for the ill-intended as it was fed by convicts and street dwellers pressed or connived into service. 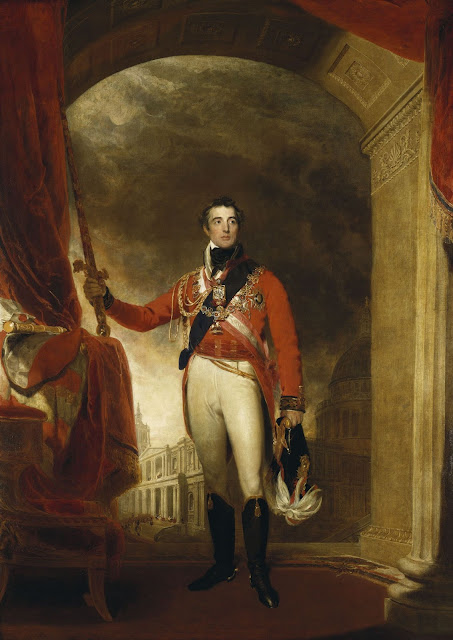 Photo: The Duke of Wellington, who allegedly originated the phrase "Scum of the Earth" in reference to the British Army during the Napoleonic Wars.

In refutation, Burns tells us that while the average solider was from the middle to lower socio-economic rungs of society – he likely was a member of the working (day labors and agricultural workers) and lower-middle class (weavers, tailors, shoemakers, and cutlers) – and probably did not have a lot of material wealth, he was generally not a convict or vagabond swept off the street by a recruiting press gang. While Burns pays a bit more attention to the British Army of the era, he also briefly explores some other European armies and the American army as well, and unsurprisingly, the trends cross national boundaries.

Further exploration into his blog quickly reveals that this is not the first time Burns touches on the subject, as he regularly explores tangential issues concerning the make-up of the British Army in several other previous posts – often using statistics derived from data sets typically obtained from orderly books and muster roles.

Along a similar vein, Don N. Hagist in both his book, British Soldiers, American War: Voices of the American Revolution, and his blog, “British Soldiers, American Revolution” (link), explores just who the individual British soldier was. While Hagist is also armed with statistics derived from muster roles and orderly books, he tends to focus on anecdotal evidence derived from memoirs, pension applications, court martial proceedings, hand bills, and news advisement. And what we get is a colorful collection of all manner of individuals who made deliberate life choices to enlist in the British military; some for reasons of national pride and service, others to see the greater world around, and still others who more pragmatically sought to escape the heavy-handed lash of an abusive master.

Whether it was to seek adventure, escape a troubling domestic situation, explore a different career, or simply to serve the crown, average British men willingly signed up to serve. And this was not the ‘slip-a-shilling-into-a-mug-of-ale’ dragoonery that is sometimes suggested. Conversely, the military recruitment process was full of checks and balances that reasonably ensured both the recruiting team would select a viable candidate for military service and that the recruit fully understand the obligations of his commitment.

Not to dissimilar from today’s military, both in Great Britain and America, the body militare is often comprised of those from the lower and middle economic rungs of our respective societies. Those that join, do so for motivations of professional security, economic predictability, an opportunity to learn a skill and/or, often, to go on a life adventure. And while we today are not enlisted following a completed, or near completed apprenticeship, we are required to be high school complete. Some of us even have a college degree, but more likely just some college classes with a little bit of work experience. We enlist at about the same age, somewhere in our late teens to early twenties. Most assuredly, we are often looking to move, at least temporarily, outside the confines of our weening in order to see the world beyond. All the while, learning a thing or two, saving a bit of paycheck and always considering whether we are doing this for just a stint or for a full professional career.

Reviewer: Gregory S. is an active duty military officer who has B.A. in History, M.S. in Strategic Intelligence, and M.A. in National Security Affairs. He has over 30 years of re-enacting experience across a number of periods. He participated in the filming of major and not-so-major movies and documentaries, and was an active participant in several experimental archaeology events.
Reviews

Unbearable Heat and "Billions" of Insects: The Guards in Tidewater Virginia

As part ten in our series on the Brigade of Guards' 1781 "Road to Yorktown" , this article continues the narrative of their 1781 campaign with the Guards' actions following their arrival in Petersburg in late May of that year. As in previous entries, it is adapted heavily from research by Linnea M. Bass and William M. Burke available on the 4th Company's website . While awaiting further orders from Lieutenant-General Henry Clinton in New York, Lord Cornwallis departed Petersburg on May 24 and headed north to Richmond to dislodge Continental troops that had come south under the Marquis de Lafayette, and to destroy rebel gunpowder magazines and other stores. The British commander ultimately marched as far north as Bowling Green (25 miles south of Fredericksburg), and sent Lieutenant-Colonel Banastre Tarleton and his British Legion as far west as Charlottesville where the Virginia Assembly was meeting (Tarleton would nearly capture Governor Thomas Jefferson).

As part eight in our series on the Brigade of Guards' 1781 "Road to Yorktown" , this article continues the narrative of their Spring 1781 North Carolina campaign with the Guards' actions following the Battle of Guilford Courthouse on March 15. As in previous entries, it is adapted heavily from research by Linnea M. Bass and William M. Burke available on the 4th Company's website . The engagement at Guilford had devastated Cornwallis' army and the Guards in particular. And for both the wounded and healthy alike, the days immediately following were dire. As Guards commander Brigadier General Charles O'Hara recounted the next month: I never did, and hope I never shall, experience two such days and Nights, as these immediately after the Battle, we remained on the very ground on which it had been fought cover'd with Dead, with Dying and with Hundreds of Wounded, Rebels, as well as our own - A Violent and constant Rain that lasted above Forty Hours

The 4th Company of the Brigade of Guards, in its historical context, was a unit of change. While it originally arrived in New York in 1776 as a the "brigade" company for the Guards (meaning it contained a mixture of soldiers from the 1st, 3rd, and Coldstream Regiments of Foot Guards), it was relabeled as the 3rd Company in 1777 and ultimately transitioned into the Guards' second light company in April 1779. For some time, we have wondered exactly why a "hat" or "battalion" (i..e, regular line) company like the 4th/3rd would overnight turn into "lights", which were frequently charged with screening the enemy, forming part of the army's vanguard, and being detached to cover ground quickly and engage smaller enemy forces independently. These light companies, along with the Brigade's grenadiers, comprised the "flank companies" of the Guards. Well, the adventures (or misadventures) of the 3rd Guards' John Watson Tadwell Wat