A Treacherous Crossing: The Guards and the Battle of Cowan's Ford

on February 01, 2019
As the first in a series exploring in detail the Brigade of Guards' 1781 "Road to Yorktown", this article highlights the first significant action of that year: The Battle of Cowan's Ford, which took place 238 years ago to the day.

There, during a treacherous crossing of the Catawba River in North Carolina, the Guards faced swift water up to their chests and heavy fire raining down on them from the opposite bank...all while being ordered not to fire themselves until they reached that far bank nearly half of a mile away. What follows is a truly amazing tale of "zeal and gallantry", adapted heavily from research by Linnea M. Bass and William M. Burke available on the 4th Company's website as well as the excellent book Long Obstinate, and Bloody: The Battle of Guilford Courthouse by Lawrence E. Babits and Joshua B. Howard.

By late January 1781, Lieutenant-General the Earl Cornwallis resolved to chase down and destroy the "Flying Army" of General Daniel Morgan, and to rescue its accompanying British prisoners captured at the Battle of Cowpens. He embarked his forces on a forced march northward through North Carolina to intercept the rebel forces, who were several days ahead of him and heading toward the Dan River and Virginia. Morgan had recently crossed the Catawba river at a place known as Sherrald's Ford, and called upon Brigadier-General William Lee Davidson and his North Carolina militia to cover several fords that the Brits might use in coming after him.

As British forces approached the Catawba on February 1, Cornwallis sent Lieutenant-Colonel Webster with artillery and the 33rd Regiment of Foot to Beattie's Ford (downstream of Sherrald's Ford) as a feint. He and Guards commander Brigadier General Charles O'Hara - with the Brigade of Guards, two field pieces, the 23rd Regiment of Foot, Regiment Von Bose, and some cavalry - went to Cowan's Ford six miles even further downstream. The Guards led, using a Loyalist guide. 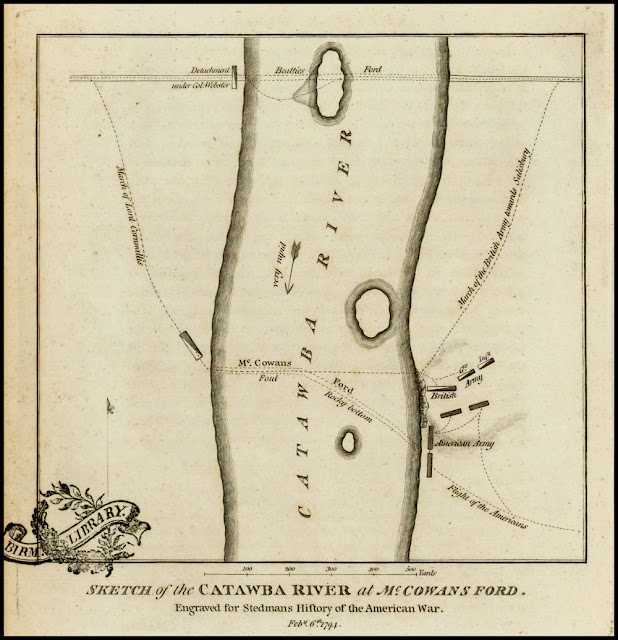 The ford there was roughly 500 yards wide (some sources claim a half mile) with a very rocky bottom. It diverged in the middle, continuing straight into a deeper part (or wagon ford) while branching into a shallower part (or horse ford) on the right that was approximately three to four feet deep. And it was this right, shallower branch of the ford that Davidson's defending force was positioned to defend, lighting numerous fires to make it appear they were much larger than their only two or three companies. O'Hara would later describe the ford as "awful" in appearance:


a Broad, Deep and Rapid Water, full of very large Rocks, the opposite shore exceedingly high and steep, covered with the largest Timber, and from the number of Camp Fires, it might be presumed a large Corps was posted there. (O'Hara to the Duke of Grafton 20 April 1781, as in O'Hara p. 175)

By the time the British arrived near daybreak, it was foggy and rainy.

The Guards' light infantry, led by Lieutenant-Colonel Francis Hall of the Third Guards, entered the water first followed by the Guards' grenadiers. (Note: By this time in the war, the 4th or "Brigade" Company of the Guards had been re-organized into the Light Company). Then came the rest of the Guards, with the men holding onto one another as they crossed the quick moving water. (Stedman p. 327) They carried unloaded muskets with fixed bayonets, and slung their cartridge boxes high up to their necks to keep them dry. (Lamb p. 344)

When the Guards were half way across, an enemy picket challenged them and fired his weapon as an alarm. There was then heavy fire against the Guards, who proceeded calmly and did not return a shot until they were on dry ground.

As they faced this heavy fire, the river presented even more perilous challenges. Their guide either left them or got confused, as the column proceeded directly across the river rather than following the shallower "horse ford" to the right. It's also possible that the guide, intimidated by the militia's lit fires directly above the shallower crossing, deliberately steered the column into the deep water. (Babits and Howard p. 18)

Whatever the reason, the stream became so swift that many were swept off their feet. O'Hara's horse stumbled on the rocks and rolled over, apparently with him in it, and "rolled him down the current nearly 40 yards." (Babits and Howard p. 19) Brigadier General Alexander Leslie's horse was carried downstream, but was luckily caught by his groom.


Yet, in some ways, fording the more difficult and deeper crossing provided the Guards with a military advantage. It led them slightly upstream of the defending militia, and the fire from Davidson's original position at the lower end of the ford now became angular against the rear of the Guards' Grenadier Company, doing little damage. (Stedman, p. 328) Nonetheless, when the Guards' Light Company was 50 feet from shore, Lieutenant-Colonel Hall was killed. According to the account of rebel militia cavalry officer Joseph Graham:


Colonel Hall was the first man to appear on the right flank on horseback behind about one hundred yards...[he] was distinctly heard giving orders but we could not hear what they were...One of the cavalry riflemen reloaded, aiming at Colonel Hall, at the flash of the gun, both horse and rider went under the water and rose down the stream. It appeared the horse had gone over the man. Two or three soldiers caught him and raised him on the upper side. (J. Graham as in September pp. 115-116)

Hall was subsequently shot dead as he reached the bank, and Captain Francis Dundas of the First Guards took command of the Light Company, which was then completing its crossing. As Graham continues:


[The Guards] kept steadily on not withstanding our fire was well maintained. As each section reached the shore they dropped their setting poles and brought their muskets and cartridge boxes to their proper places faced to the left and moved up the narrow strip of low ground to make room for the succeeding section...By the time the front rank got twenty or thirty steps up the river they had loaded their pieces and began to fire up the bank. (J. Graham as in September pp. 115-116)

Indeed, by the time the bulk of Davidson's men inclined to their right and ran along the river bank toward the spot where the British were crossing, the company had formed. The rebel forces subsequently did not last long once the British were on the shore, and General Davidson himself was killed shortly after her arrived at the scene.

Once the smoke had cleared and the Americans withdrew, the British took stock of their casualties. Official reports listed three privates killed and 36 wounded, although local accounts that the river "stunk with carcasses after the crossing" intimate that British losses may have been higher than three enlisted dead. (Flood p. 387). Many likely were simply swept away by the current, as a local allegedly discovered fourteen dead men without noticeable wounds lodged in a set of fish traps below the ford. (Babits and Howard p. 22)

Lieutenant-Colonel Hall was buried at the edge of the alluvial land a short distance below the crossing place with a head and foot stone of rock from a nearby hill. These were visible for many years until covered by sand from river floods. The privates of both sides were buried together on the rising ground near the scene of the conflict.

Following the engagement, Cornwallis wrote he was in:


full of confidence in the zeal and gallantry of Brigadier-general O'Hara, and the brigade of guards under his command...Their behaviour justified my high opinion of them; for a constant fire from the enemy,in a ford upwards of five hundred yards wide, in many places up to their middle, with a rocky bottom and strong current, made no impression on their cool and determined valour, nor checked their passage. The light infantry, landing first, immediately formed, and in a few minutes killed or dispersed every thing that appeared before them." (Cornwallis to Germain, 17 March 1781, as in Tarleton p. 262)

Graham, William A. (1904), General Joseph Graham and His Papers on North Carolina Revolutionary History, With An Appendix: The Epitome of North Carolina's Military Services in the Revolutionary War and of the Laws Enacted for Raising Troops (Raleigh: Edwards & Broughton)

Lamb, R. (1809), An Original and Authentic Journal of Occurrences During the Late American War, from Its Commencement to the Year 1783 (Dublin: Wilkinson & Courtney)

Unbearable Heat and "Billions" of Insects: The Guards in Tidewater Virginia

As part ten in our series on the Brigade of Guards' 1781 "Road to Yorktown" , this article continues the narrative of their 1781 campaign with the Guards' actions following their arrival in Petersburg in late May of that year. As in previous entries, it is adapted heavily from research by Linnea M. Bass and William M. Burke available on the 4th Company's website . While awaiting further orders from Lieutenant-General Henry Clinton in New York, Lord Cornwallis departed Petersburg on May 24 and headed north to Richmond to dislodge Continental troops that had come south under the Marquis de Lafayette, and to destroy rebel gunpowder magazines and other stores. The British commander ultimately marched as far north as Bowling Green (25 miles south of Fredericksburg), and sent Lieutenant-Colonel Banastre Tarleton and his British Legion as far west as Charlottesville where the Virginia Assembly was meeting (Tarleton would nearly capture Governor Thomas Jefferson).

As part eight in our series on the Brigade of Guards' 1781 "Road to Yorktown" , this article continues the narrative of their Spring 1781 North Carolina campaign with the Guards' actions following the Battle of Guilford Courthouse on March 15. As in previous entries, it is adapted heavily from research by Linnea M. Bass and William M. Burke available on the 4th Company's website . The engagement at Guilford had devastated Cornwallis' army and the Guards in particular. And for both the wounded and healthy alike, the days immediately following were dire. As Guards commander Brigadier General Charles O'Hara recounted the next month: I never did, and hope I never shall, experience two such days and Nights, as these immediately after the Battle, we remained on the very ground on which it had been fought cover'd with Dead, with Dying and with Hundreds of Wounded, Rebels, as well as our own - A Violent and constant Rain that lasted above Forty Hours

The 4th Company of the Brigade of Guards, in its historical context, was a unit of change. While it originally arrived in New York in 1776 as a the "brigade" company for the Guards (meaning it contained a mixture of soldiers from the 1st, 3rd, and Coldstream Regiments of Foot Guards), it was relabeled as the 3rd Company in 1777 and ultimately transitioned into the Guards' second light company in April 1779. For some time, we have wondered exactly why a "hat" or "battalion" (i..e, regular line) company like the 4th/3rd would overnight turn into "lights", which were frequently charged with screening the enemy, forming part of the army's vanguard, and being detached to cover ground quickly and engage smaller enemy forces independently. These light companies, along with the Brigade's grenadiers, comprised the "flank companies" of the Guards. Well, the adventures (or misadventures) of the 3rd Guards' John Watson Tadwell Wat