Podcast E05: Production Team for "Elijah & George" (A Film of the Revolution)

on February 14, 2019
In this latest episode of Firelocks, the Podcast, we turn our focus on the independently-financed feature film, "Elijah & George" set to begin production this summer in Virginia. The movie is set to tell the adventures of a young camp follower as he encounters famous figures of the Revolution on his search for his father who has gone missing during the 1778 Battle of Monmouth. Described by its creators as "Tom Sawyer Meets The Patriot", the film will highlight the often-forgotten lives of young camp followers who served alongside the armies of the conflict, and will be appeal to families and viewers of all ages, lovers of history, and of course appreciators of good film-making.

Joining host Bill Patchak for the discussion are Andrea Clarke (director/producer/writer), Michael Dooling (producer and also illustrator/author of the book that inspired the film), and Ben Theis (historical adviser and 4th Coy's own). The four chat about the inspiration behind the film's development, its ongoing pre-production activities, and the efforts being undertaken to ensure its historical accuracy.


Most importantly, however, we must emphasize that this movie CANNOT succeed without the help of all of you history enthusiasts and followers of the American Revolution out there. In order to ensure that it remains independent and maintains its freedom to tell its story exactly how it was meant to be told, the production - via "From the Heart Productions" - has set up a tax deductible fundraising campaign to initially complete a short "proof of concept" short film and subsequently to allow for full production this summer for an intended fall 2019 release.


For more information on the production, as well as its excellent and impressive cast and crew, please visit its website or follow it on Facebook. But most of all, please seriously consider contributing to the film's financing and enjoy this episode's unique opportunity to hear directly from a passionate author and filmmaker on their inspirations behind and challenges ahead in bringing an American Revolution story to life. Listen below or on iTunes. 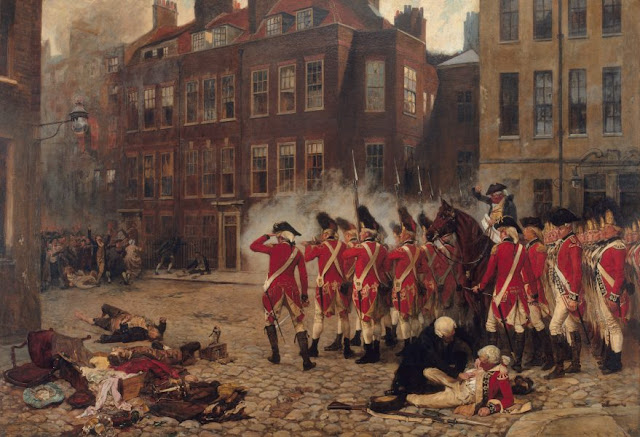 Just Because it is Old, Doesn't Mean it is Correct

The following scholarly exploration is provided by Gregory Starace, who portrays a Private in the Coldstream Guards of our re-created 4th Company. He is an active duty military officer who has B.A. in History, M.S. in Strategic Intelligence, and M.A. in National Security Affairs. He has over 30 years of re-enacting experience across a number of periods, participated in the filming of major and not-so-major movies and documentaries, and was an active participant in several experimental archaeology events.

Being re-enactors and amateur historians means we spend large portions of our free time researching the history of the people and time period we represent. We do this so that we can continually develop our particular portrayals and enhance the educational vignettes we deliver to our audiences. And when the time period you focus on is almost 250 years old - both before film and widespread literacy - and when our country was just emerging from the Petri dish of colonialism, extant… 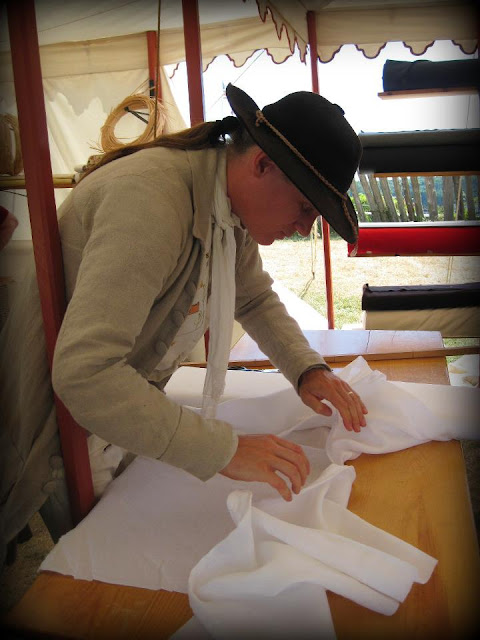 Podcast E04: Paul Dickfoss (Wm. Booth, Draper at the Sign of the Unicorn)

In this episode of Firelocks, we delve once again into the world of material culture. And while we recently chatted in an earlier episode with Ian Graves of Royal Blue Traders, this time we are with another master of period fabrics: William Booth. Well, by that we mean we are joined by Mr. Paul Dickfoss, the man (and mastermind) behind Wm. Booth, Draper at the Sign of the Unicorn.

Paul, known to so many of us for his expertise in the hobby, shares his experiences running a full time business outfitting the re-enacting community. In the course of our discussion, we touch on the research methods that help him identify period-correct fabrics and the challenges of accurately replicating 18th century fashion, as well as his findings on how people of that century approached their own clothing purchases and wear habits.


If you haven't already, please do follow him on Facebook. But most of all, please enjoy his expertise, - streaming below as always, but now also on iTunes!

How many times have we as reenactors of the British Army been asked "where's your English accent"? Paired with our habit for 20th century anachronistic phrasings, the lack of an obvious accent surely takes tourists out of the moment of "living history". Orders shouted within British units, using our distinct American accents, surely can't be historically correct….
or could they?….
To explore the issue a little deeper, let's first consider what we Americans consider to be the "proper" British accent. It's actually called "Received Pronunciation" (RP), with received meaning in this case, "accepted". It can also be referred to as "BBC English" for its standard use in mid-20th century broadcasting, or the "Queen's English" (even though this is technically a reference to dialect and grammar and not pronunciation).
The truth is that only about 2-3% of modern British people speak RP. So aside from our stan…